A look at voter registration and turnout

For the last few years, I have been crunching data about voter turnout and voting results for Benzie County, and I have also compared these data with population demographics. It is just kind of a hobby—something fun to do, trying to figure out statistically why Benzie County works the way that it does. #ilovespreadsheets
Here are a few of the cool trends that I have found:

1. BENZIE COUNTY HAS HIGH VOTER REGISTRATION: And by high, I mean literally off the charts.

OK, let me explain. If you are 18 or older, you are considered part of the Voting Age Population (also known as VAP), meaning that you are old enough to vote. But let’s face it, not everyone who is old enough to vote actually registers to vote. Moreover, not everyone who is old enough to vote is even eligible to register to vote; thus there is an entirely separate category called Voting Eligible Population (VEP), which excludes non-citizens, criminals, and others who are 18 years of age or older (so they fit into VAP) but are not eligible to vote (so they do not fit into VEP).

All of the confusing lingo aside, let’s look at how many people who are old enough to vote (VAP) are actually registering to vote. 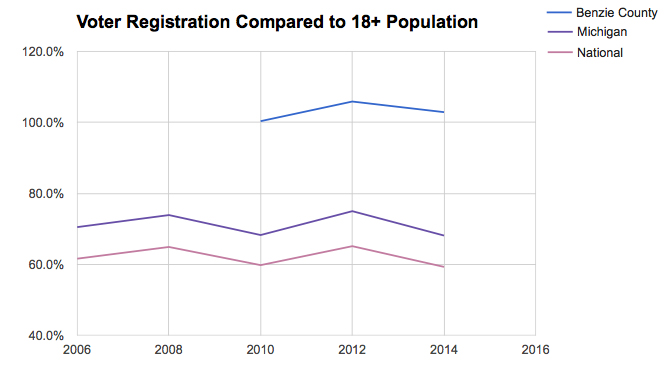 Wait, what? How is that possible? Well, the most likely scenario is that someone’s numbers are off: either the number of registered voters in Benzie County or the Census estimate for how many adults are living here. 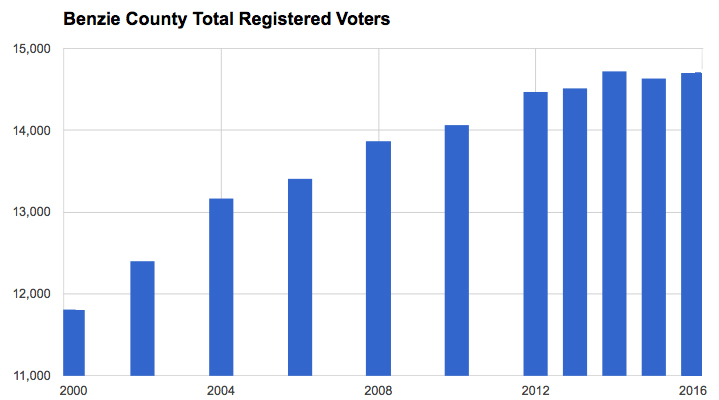 Regardless of why the data is off and by how much it is off, I doubt very much that it would make that big of a difference: I bet that our numbers would still hover closer to 100 percent than to the national average of 60 percent or the state average of 70 percent. And I think that this is pretty amazing. To even be close to 100 percent voter registration—let alone to be over 100 percent—means that something is going on here in Benzie County to make us register to vote more than other places, but what is it?

I am not entirely sure, but I have a sneaky suspicion that our active Benzie County League of Women, Benzie Republicans, and Benzie Democrats play a big role. Maybe it has something to do with a high proportion of “snowbirds” voting absentee here in Benzie County but not getting counted here by the Census?

I also know from experience that students at Benzie Central High School get extra credit in their government and civics classes—which all students are required to take—when they register to vote. Additionally, just last week, the Benzie Republicans and the Benzie Democrats teamed up to register students to vote during lunch: they signed up 10 of the possible 17 age-appropriate students at Frankfort High School and an additional two at Benzie.

On top of that, I have heard that the employees at the Secretary of State office in Honor are diligent in asking every person who goes there to get a driver’s license and/or state ID if they also want to register to vote.

“Their perseverance of getting people to register is a big help when it comes to the number of registered voters that we have here in Benzie County,” says Gaylynn Howton, local resident.

When it comes to voter turnout, many media outlets have reported that Benzie is often among the top counties in the state to have people show up to the polls. “Registered Voter Turnout” is voter turnout as a percent of the registered voter list who actually voted on election day—this does not count people who are not registered to vote. In Michigan, you have to be registered three weeks before the date of an election to be able to vote. (Note: Tuesday, October 11, was the last day to register for the upcoming presidential election on Tuesday, November 8. As of Monday, October 9, Benzie County had 15,042 registered voters.) 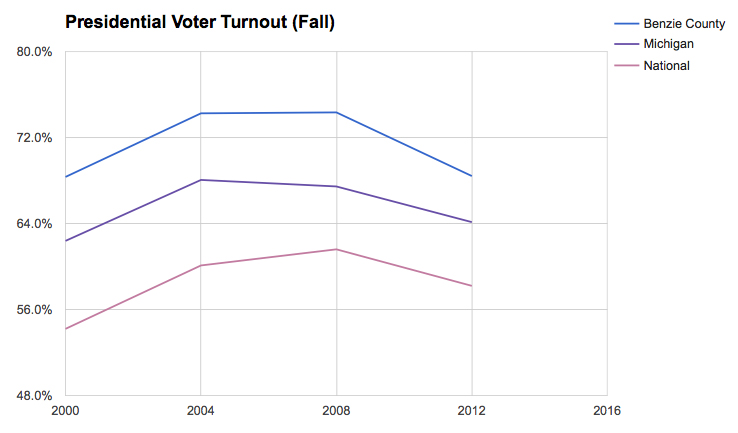 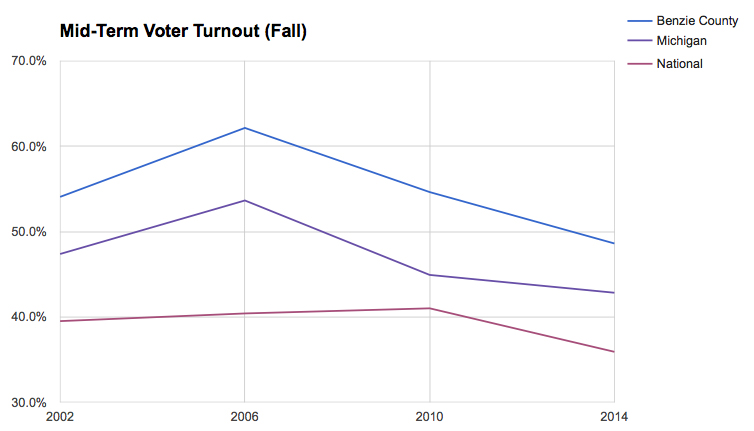 And last spring’s presidential primary was no exception: voter turnout in Benzie County was 38.7 percent on Tuesday, March 8, 2016, compared with 33.8 percent on the state level. And while it is true that voter turnout was higher than normal throughout the United States during this presidential primary, this was not an isolated incident for Benzie County—consistently over the past decade and a half, we have had turnout numbers that average 5 percentage points higher than Michigan as a whole: as much as 8.8 percent higher in 2000 and as low as 3.2 percent higher in 2008. 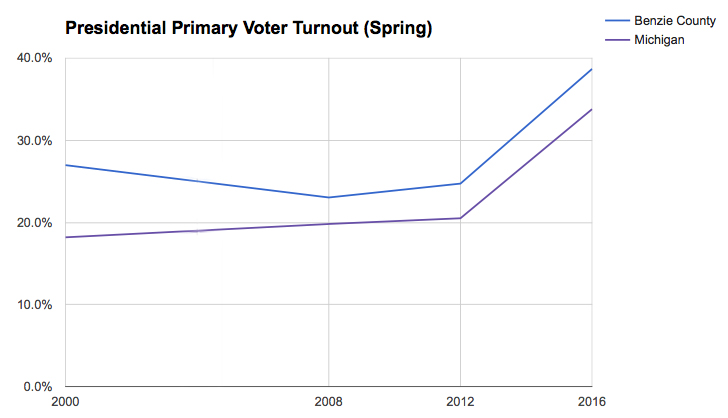 In fact, we had incredible turnout last spring for the presidential primary in Benzie County—around 2,200 more people voted in the 2016 primary than in the 2012 primary!

In other words, this year’s primary helped to close the gap in the number of registered voters who vote compared with the number who do not vote. It will be interesting to see if and how these trends continue in the upcoming presidential election this month.

To conclude—yay for us in Benzie County for rocking the vote, not only in the 2016 primary election but in all of our elections for the past 16 years!