Seth Bernard was born on April Fools Day and raised by a pack of wild coyotes on the high-desert plains outside of Lake City.

What? No desert outside of Lake City, you say? Fine.

“The truth is that he was born to woodland fairies from the Great Woods of Northern Michigan, and it is said that the Great Woodland King gifted him with joy of music and set him among the humans to promote peace and joy in song and fellowship,” claims Laura Hanthorn.

“He lived with the Garden Gnomes for thousands of years. He learned about the plants and the trees and the earth. But one day, he learned music. As he picked up his guitar everyday to play, he slowly began to grow. Grow and grow until he was a giant. The gnomes thought that he had become some kind of great spirit. Then, after the elder gnomes had further discussion, they found that the late night jams, morning sessions, brunch hoe-downs, lunch parades, afternoon gatherings, dinner dances, and loud rock & roll every day was too much for the gnomes to handle. So, after long discussion, they decided to send him to live with the humans and other animals of the forest. And to this day this musical gnome travels around, sharing his music with all of us.”

Others share a popular (or soon to be popular) conspiracy theory: Seth was placed by aliens amongst us to promote sustainability and peace, thus the title “Hello Fellow Travelers” on his first album.

Or maybe he grew up on a farm where music entwined his early years. “It wasn’t anything separate that was just for entertainment. It was part of our work; it fueled our work,” Bernard told Circle of Blue in a 2012 interview.

Regardless of where he might have come from, or if he is even human, some facts are indisputable. We are not sure where to find those, so we collected some psuedo-facts, myths, rumors, and otherwise.

(Editor’s note: these untrue facts may, in truth, be true facts. We don’t know.)

Stories of the People

Folklore is the stories and music of the people; it is the music of a place, of its people, of its traditions.

Seth Bernard is a folk musician. He’s a storyteller, a joker, a trickster, a builder of new communities, and a warden of the old communities. He is kind, warm, and welcoming. At times, he’s a road-weary musician, wizened and weathered by a world needing change. Most days, he lives up to, and transcends, all of the myth and legend surrounding him.

If you tell him how great he is, he should quote a line from the movie that he starred in (yes, that one was true).

“I know, but lets not get cheesy about it.”

Instead, he’ll smile at you, say thank you, and ask what you’ve been up to, or about that song you are working on, or that new paper you are publishing. Yeah, he’s that guy.

Also, his alter ego is a lightning bug.

See Seth play tonight at the Cabbage Shed celebrating the release of his new album “Reconciliation and the Mystical Beyonda”.

He’ll be playing with serious rock dudes Joshua Davis from Steppin In It, Max Lockwood from Big Dudee Roo, and Gregory Stovetop all the way from NYC. Josh and Stovetop will serenade the crowd first and then get behind the keyboards and drums, respectively, for the duration. $5 cover at the door. 9pm. 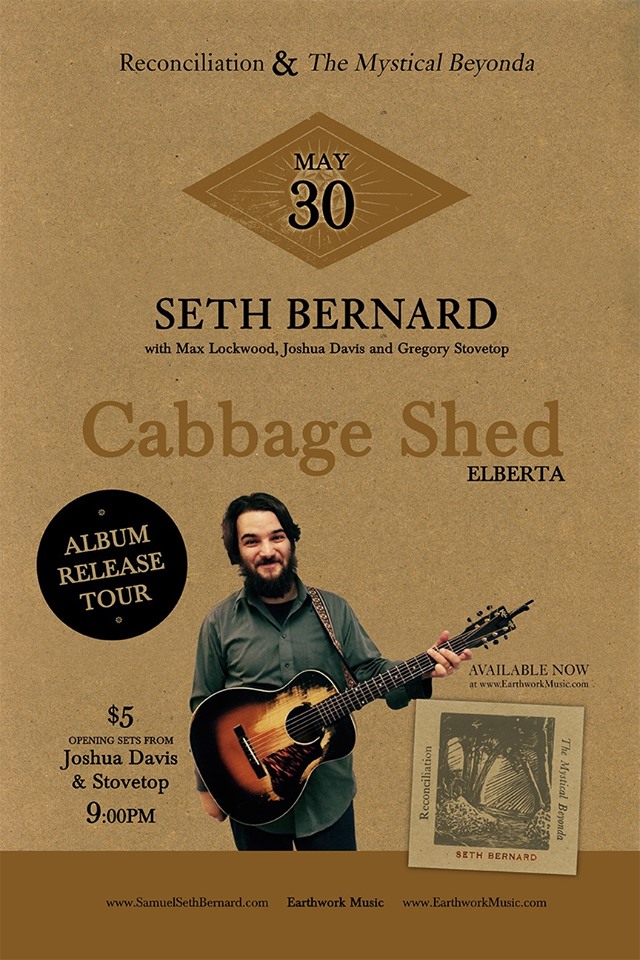