“In nature, there’s no blemish but the mind;
None can be called deformed but the unkind.”

Once again, strange folk descend upon the forest of our fair Tank Hill to haunt us with epic tales of tragedy and then, with a change of outfit, beguile us with raucous comedies. They call themselves actors, others call them thespians. They worship strange creatures, but none stranger than the one they call the Bard, who compels them to act out his plots for days on end, in rain or blistering heat, with little rehearsal. He pays them naught but in the cheers or jeers or tears of their beggar audience.

Back for their 11th season, the Lakeside Shakespeare Theatre (LST) will again be performing one tragedy (Richard III) and one comedy (Twelfth Night) in Frankfort on alternating evenings from July 15 through July 25 (with the exception of taking one night off on July 21).

Richard III is known for being one of Shakespeare’s bloodiest plays, and LST says that their rendition promises “loads of creepy conniving on the battlefield and in the throne room, as Richard of Gloucester ascends to the throne through betrayal (and beheadings) of his own royal family.” Meanwhile, Twelfth Night features Viola and Olivia, two heroines who meet by chance after a shipwreck, and LST is sure to add their popular indie-folk, sing-a-long musical stylings to this comedy that is full of “secret identities, hidden feelings, drunken revelries, [and] true love.”

The idea of Elizabeth Laidlaw as a way of connecting Chicago’s thriving theatrical community with both the full-time and seasonal residents of Benzie County, LST began in 2003. Every year since, a team of two dozen or so actors, stage managers, sound-effect gurus, and directors has spent two weeks rehearsing and performing here in the northland, in addition to about six weeks of rehearsals in Chicago before they get here.

This year, the company began rehearsing in Benzie County on Sunday, July 13, running through the first half of Richard III from just after breakfast until just before lunch. A short break for the peak of summer heat in the afternoon – during which, most cast members apparently nap – they then ran through the second half of the tragedy. On Monday, July 14, the cast then spent morning and afternoon running through Twelfth Night.

Given that the preview performances on Tuesday and Wednesday, July 15 and 16, are full dress rehearsals that are attended by the public, that means they’ve been in Benzie County just over 48 hours before they begin performing.

It’s a very intense process, Laidlaw admits. “At 25 hours a week, it’s typical for a full-length show to rehearse for six weeks. But we rehearse two full-length shows in six weeks, so we have about 14 rehearsals per show. It’s an insanely fast process.”

Fortunately, many of the actors are seasoned at this. Sure they have “newbies” each year, but the company also has several “veteran” actors, Laidlaw says, some who have been with LST more or less since the beginning. When the “newbies” ask if the timeline is even possible, she responds, “Trust me, it can be done. But it’s logistically insane.”

Yet, despite the insanity, they keep coming back. Christy Arington, LST’s education director, is in her 10th season, having participated every year except the first. Arington says that performing Shakespeare in Benzie County is like no other audience experience.

“It’s almost like our audience is the final participant in this thing that we do,” Arington says. “So sharing this with them is amazing, and that’s why I keep coming back – because there is nothing that duplicates this experience. We could all get other jobs in the summer that would pay us a lot more money, but this? This is special. This is magic.”

“When people can’t do the shows, they are really sad. This is my year, my turn to be really sad,” Laidlaw sighs. “But we’ve built something that doesn’t require just one person. It’s a huge team effort, and if one member of the team has to step out, we have this incredible group of people who are going to keep the ship afloat. I really trust that.”

Now in her fourth season with LST as she takes the helm, Gorsky will not only be found behind the scenes – she plays Viola, one of the leads in Twelfth Night, as well as Catesby and Murderer #1 in Richard III. Gorsky echoes Arington’s sentiments about the Benzie County audience being a top reason for return.

“We all work for a lot of different companies in Chicago – as an actor, you work wherever you get cast – but the audiences here are really unique to all audiences that I’ve ever had. I feel like they are involved and excited about Shakespeare and about the plays and about supporting this company in a way that I don’t see everywhere,” Gorsky says. 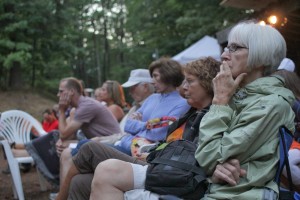 As for why audiences keep coming back – and why they are growing to now include patrons from Manistee, Charlevoix, Traverse City, and beyond – Laidlaw and Gorsky attribute the quality of the productions. They talk about LST’s approach to Shakespeare with terms like “accessibility” and “reach.” Oh, and “fun.”

“We don’t make it something that people cant grasp or attach themselves to,” Laidlaw says. “The experience of seeing Shakespeare outside is fun. So you’ve got an excellent, high-quality production, fantastic actors, and a very approachable experience to some of the greatest plays ever written.”

“Sometimes when you think of Shakespeare and the language, it’s hard to understand what they’re saying because it’s older English,” Gorsky says. “But our actors are so good – they have such clarity – that even people who might not know what all the words mean can understand the stories really well and understand the characters and relate to them.”

Another way that LST makes 15th and 16th century Shakespeare accessible is they shake things up. From composing their own catchy soundtrack for a comedy to setting a contemporary scene for a pair of star-crossed lovers, the group finds new and interesting ways to envision the Bard’s works. Last year, for instance, Juliet could have easily been a summer-resident teen in her polo shirt and tennis skirt, while Romeo’s buddies sported Frankfort Panthers’ purple and gold under their leather jackets.

Sometimes, though, it’s the venue that makes these timeless plays come to life. When LST made the switch from its original Elberta location (at the amphitheater in Waterfront Park, near the Lifesaving Station) to its current Frankfort location (at Tank Hill Park, just down the hill from Paul Oliver Memorial Hospital and across the street from St. Ann’s Catholic Church), the company was putting on King Lear. On opening night, a family of deer walked across the forest ridge behind the stage. During one performance of Macbeth the next year, vultures were circling above while the witches, who were covered in blood, were coming out of the forest. Also in 2011, a neighbor dog was on a jaunt in the woods with Queen Titania’s fairies during A Midsummer Night’s Dream.

For the two weeks that they are here, the players live and eat together; they work and play together. This year, six college interns are living in a loft space above a garage, while about one-third of the company is currently holed up at La Rue House in Elberta. Once rehearsals slow down and production gets going, the group will spend their days pre-performance swimming Benzie County’s waters and biking its trails.

Jeff Christian (Richard in Richard III and a sea captain in Twelfth Night) is a founding member of LST who remembers being nervous that no one would show up on opening night of the first show back in Elberta. Now LST drums up more than 1,000 audience members per season.

So why does Christian – who has been here every summer since that first except for one – keep coming back? Once again, it’s the Benzie County audience. He feels like he “gets to know” audience members who come multiple nights, and he loves that he can talk with them, something that doesn’t happen “in a normal theater situation.”

Not only do the players talk with audience members, they occasionally even use them as props – tripping over someone’s chair during a comedy or faux-whispering into someone’s ear during a monologue. Moreover, a pair of actors may rifle through your picnic basket, picking out what they want and carrying it off with them.

“For some reason – I don’t know why – but people just love it when we steal their food and their beer,” Laidlaw says. “They offer it up, ‘No, take mine!’ I don’t know what that’s about, but I think it’s hilarious.”