Their imprint on our collective history

This year, the National Park Service is celebrating its centennial. Parks around the nation have launched a social media-driven #FindYourPark campaign to excite millennials and young Americans about their natural and public treasures. The strategy appears to be working. Here in Northern Michigan, the Sleeping Bear Dunes National Lakeshore posted record visitation numbers last year in the run up to the 100th birthday of the NPS. [NOTE: Sleeping Bear itself was born in the 1970s.]

One element of the campaign is to connect youth—urban youth in particular—with their National Parks. Another is to recognize the under-acknowledged role that Africans Americans played in places and events now preserved by our parks. An episode last month of the NPR show “Here & Now” featured Outdoor Afro, a group that attempts to build a stronger interest by African Americans in outdoor activities such as hiking, camping, and watersports, particularly in National Parks. In May, the Bright Star Touring Theatre traveled to Northern Michigan and performed “Lift Every Voice: The Black Experience in the Heartland” at Traverse City’s State Theatre and Benzonia’s Mills Community House.

For years, the instigator pushing Sleeping Bear Dunes National Lakeshore to recognize the role of African-American settlers in Benzie and Leelanau counties in the late 1800s has been author, advocate, and Park namesake Kathleen Stocking. Her father, Pierce Stocking, once owned much of the land that is now our National Lakeshore, including Pierce Stocking Scenic Drive. Kathleen Stocking, who was called a rural “seer” by The New York Times in 1991 for her first book, Letters from the Leelanau, just published her latest book, The Long Arc of the Universe—Travels Beyond the Pale, about her global travels over the last 20 years. Stocking will speak, and sign copies of The Long Arc of the Universe, at the Benzie Shores District Library in Frankfort at 2 p.m. on Friday, July 22, and at The Bookstore in Frankfort at noon on Saturday, July 24.

On a morning in early June, the air smells sweet, like honey or elderberry jam, down at the beach at Otter Creek in the Sleeping Bear Dunes National Lakeshore, just south of the Benzie-Leelanau county line, at the end of Esch Road off M22. It is the smell of the dangling cones of blossoms from the black locust trees above, mixed with the odor of the fragrant yellow flowers of the hoary puccoon. Hoary is an antiquated word for hairy and refers to the fuzzy leaves of this beautiful flower, which stands about 18 inches high, is a member of the borage family, and grows profusely up and down the beach.

Otter Creek itself tumbles brightly down out of the northeastern hills and wetlands and into Lake Michigan. The sound is faintly musical, especially when combined with the soft counterpoint, the heartbeat-like rhythmic sound of the lapping of the lake on the shore. Soon the tourists will arrive from all over the United States, and even other parts of the world, but right now the beach is deserted.

Otter Creek was once populated year-round, when it was the site of the lumber boomtown, Aral, a place where there was a little one-room school. A state photo shows black and white children in pioneer garb. Their teacher, barely more than a teenager, is in a wasp-waisted gingham dress.

The students would have been the children of the men who worked at the mill. Later, the mill would be taken over by the House of David, a religious group from Benton Harbor that made money in farming, lumber, and, when baseball became all the rage, touring the country and playing for money. According to Wikipedia, the House of David played several games in Kansas City against the Negro League, made famous by Satchel Paige.

If you visit Otter Creek and the former site of Aral on a balmy spring day, before the tourists arrive, you will see nothing but a soft sand beach, the color of the inside of a white Raritan Rose peach. The inviting-looking, beautiful, clear blue-green and dark-blue waters of Lake Michigan stretch west toward the Wisconsin shore, a shore that you know is there but cannot see with the naked eye. It is in the mind, as real as if you could see it.

African-American homesteaders, like other immigrants, began to come into Michigan during the 1860s. Census figures compiled by Katheryn Carrier, reference librarian at the Traverse City Area District Library (TADL), reveal that some black Benzie County pioneers were farmers, like the Davis, White, Hays, Ward, and Richardson families. Some, like the Dorey and Batey families, were coopers and musicians, respectively. There were several families of black pioneers in Leelanau County, too, including the Johnsons, the Smiths, the Halls, the Skinners, and the Bostons.

Some African-American pioneers here—like the Hall and Skinner families, based on State of Michigan archival photos of students at one-room schools at Aral, Honor, Platte River, Empire, and Glen Lake—may have moved back and forth between Benzie County and Leelanau County, living and working in the various lumber camps and sending their children to whichever one-room school was in closest proximity. Michigan, an anti-slavery state, had integrated schools from the beginning. And at the time, Michigan had one of the best-funded education systems in the country, so the state was able to afford, among other things, a photographer who went around from school to school to photograph the students. (Quite a feat, considering that, by the early 1900s, there were 7,200 one-room schools in Michigan, the idea being that every child should live within a three-mile walk of a school.)

The lumber camps in those days provided housing, hastily constructed of logs or unfinished lumber but still serviceable. Houses were heated with scrap wood from the mill. Most families had a vegetable garden and could hunt and fish. Wages were generally $30 a month, or a dollar a day, for a laborer.

“African-American pioneers on the West Michigan logging-lumber frontier participated in, and became able contributors to, the economic and civic life of that frontier,” according to the Historical Society of Michigan.

But lumbering was hard, dangerous work. Log rolling or “rafting” was the most dangerous and difficult of all. A large lumber company might need to employ 300 men in the wilderness. The men needed to be handy with an ax and good with a crosscut saw, have great stamina, and be able to withstand weather extremes—this is known. But what is known about their families?

The William Davis family homesteaded—and has the certificate to prove it—in Joyfield Township in Benzonia beginning in 1862. They were a family of loggers and farmers.

Born near the Pennsylvania-Virginia border in the decades before the Civil War, William Davis was the son of a Scots-Irish planter and his black mistress, according to Betty DeRamus in her book, Forbidden Fruit: Love Stories from the Underground Railroad. Once grown, William Davis married Mildred Brand in Philadelphia. After a time living in Ohio, the couple came north with their family, including grown son, Joseph. William Davis homesteaded 160 acres in Joyfield, and Joseph homesteaded an adjacent 160 acres.

There were no roads for the earliest pioneers. Even if a person could find a place to buy provisions, it was hard to get food stores, tools, and livestock through the wilderness and into the homesteads. One could never be assured of having a steady source of food from hunting and fishing. Usually, until homesteaders cleared enough land to grow their own food, it would have been a precarious existence. Staying warm, dry, and clean in a lean-to during a Michigan winter was a challenge for anyone, much less for small children, infants, and women who might give birth. The intrepid Davis family, however, stayed year-round from the start, unlike many of their white counterparts, who sent only the men of the family for the summer months. From May to October, white male settlers like the Shaugers of Empire would cut trees, put up a lean-to, and stake their claim, returning to their families in Ohio or Wisconsin for the winter. But not the Davis family, which arrived in 1862—they continued to grow and thrive here.

William and Mildred (Brand) Davis, who already had six children by the time that they arrived in Northern Michigan, would have three more after arriving here. This couple would take in as many as 16 children: black, white, and Native American. One, Rose, found in a gunny sack at the side of the road, would later become their son Joseph’s third wife after his first two wives died.

The Davises were pillars of the community, respected for their hard work and willingness to help neighbors. The family donated land for the Joyfield Township Cemetery and for a nearby church. When I spoke with a Davis descendant, Shelley Murphy, by phone in 2013, she said the respect of the surrounding community was a constant throughout the generations, going all the way back to 1862.

Several male offspring in the Davis family served in the U.S. military. Calvin Clark Davis passed for white in 1941 and joined the 5th U.S. Army Air Force, 90th Bombardment Group, 400th Squadron, according to author DeRamus. In 2011, the Traverse City Record-Eagle did a profile of another Davis descendant, Viet Nam veteran Calvin Murphy, who now lives in Bear Lake in nearby Manistee County. 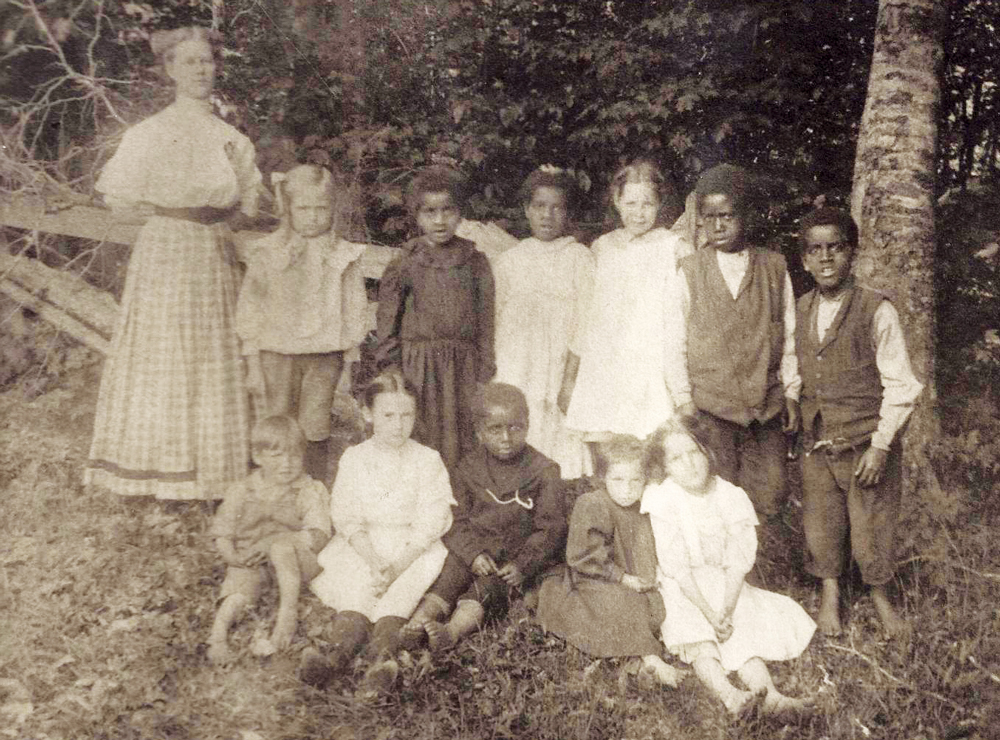 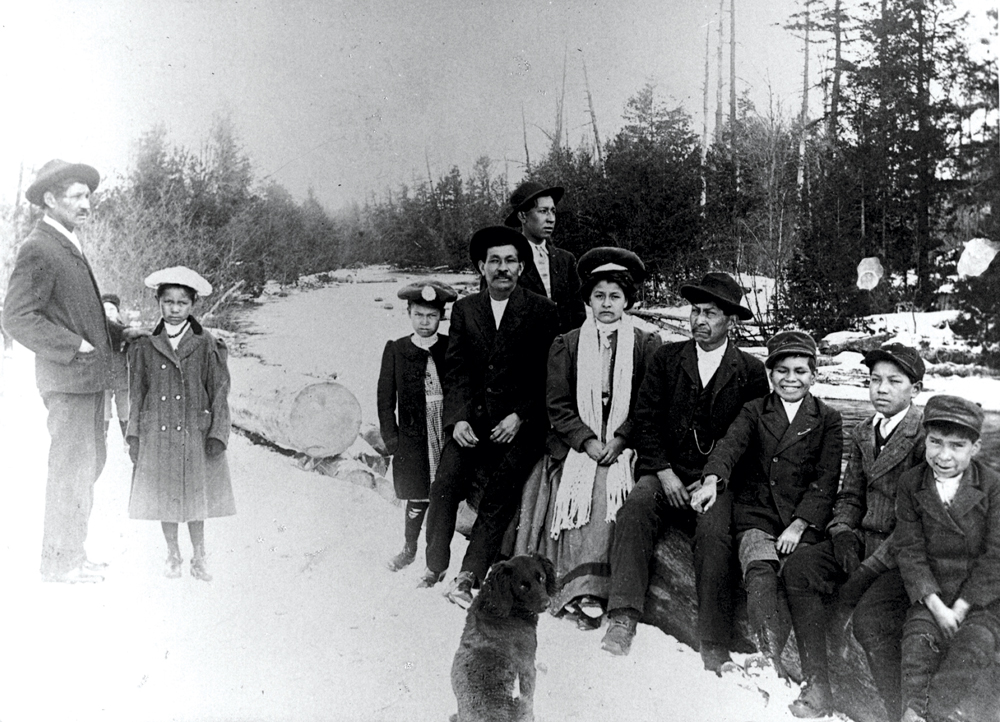 Verna (Worden) Murphy, Calvin and Shelley’s mother, a Davis descendant, attended high school in Honor. Later, living in Virginia, Murphy described her childhood as pleasant, helped by the fact that her family was well to do.

“We were the taxi. If someone needed to go to the doctor, we could take them,” says Verna, who explains that she did not look black, though people knew her origins. “I never experienced any prejudice; maybe a little jealousy because we had a little more than some of our neighbors.”

Shelley Murphy, Verna’s daughter, returns as often as she can to the Benzie Area Historical Museum (BAHM) to update her family’s pioneer history. An ardent genealogist whose emails always end with the signature, “Know your roots, they are long and strong,” she has worked to document family lore in order to make sure that descendants know their history.

Dr. Lewis Yock, previous director and archivist at the BAHM, has been an excellent source of carefully collected and preserved photos of early African-American pioneers in Frankfort, Elberta, Honor, Beulah, and Benzonia.

A photo in the BAHM archives shows one family, unidentified, all dressed up, looking as if they are on a holiday, waiting for a train at one of the many now-vanished railroad sidings.

The BAHM photo of the Batey family, also looking elegant, included several musicians, one of whom allegedly performed for Abraham Lincoln in the White House.

The dignified looking Richardson family, from the 1915 plat book, had their photo taken in Elberta. [Elberta is misspelled ‘Alberta’ in the photo caption.] The photo shows a broad-shouldered, reserved-looking patriarch surrounded by three members of his family.

A photo of one of the Skinner men sitting atop of a pile of logs shows him looking confident, even jaunty. He is wearing a large fur coat with an incongruous white ermine fur collar.

What were their lives like? How did they arrive on this frozen shore? We do not know. We can guess, we can surmise, we can extrapolate based on what we know of other black families, such as the Davis family, where there are written records and living members of the family.

But ultimately for most black pioneers, only their photos and a few census records even prove that they were here.